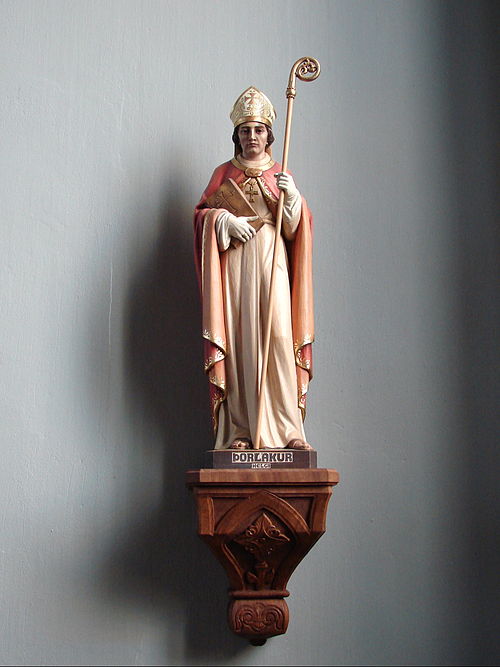 Saint Þorlákur is Iceland´s only saint. Þorlákur was born 1133 and received his education at Oddi. After his years in Europe  he became a priest at Kirkjubær and later he was an abbot at Þykkvabær in Álftaver. It was popular for people to seek his intercession and that many had their request granted.

Saint Þorlákur is Iceland´s only saint. His feast day is the 23rd of December, the day of his death in 1193. That day Icelanders traditionally celebrate by eating fermented skate, a dish certainly not for the faint-hearted. Þorlákur was born here in the south in 1133 and received his education at Oddi, a renowned seat of learning in the south.

At the unusually young age of 18 Þorlákur was ordained a priest, this apparently being allowed due to the scarcity of clergy in the country. Later he would spend six years abroad furthering his education both in Paris and Lincoln in England. On returning to Iceland he became a priest at Kirkjubær. Six years on he became the canon and then abbot of the first Augustinian monastery in Iceland. Later, he would become bishop of the southern bishopric of Skálholt.

Saint Þorlákur was clergyman at Kirkjubæjarklaustur for six years. He watched the sams landscape as we do today. (Photo LM)

We know from The Saga of Saint Thorlákur that he enjoyed living and working at Kirkjubær and that he was reticent to leave and take on the task of establishing the monastery at Þykkvabær.

Saint Þorlákur became a canon and then abbot of the monastery at Þykkvabæ in Álftaver. From Þykkvabæ the view is amazing. Mýrdalsjökull shining on a beautiful day. (Photo LM)

As already mentioned, Þorlákur is Iceland´s only saint. In January 1984 he was canonized by Pope John Paul II and declared the country´s patron saint. In The Saga of Saint Thorlákur we´re told that it was popular for people to seek his intercession and that many had their request granted. There´s the story of the woman who suffered severe pain in her eyes and prayed to Þorlákur. She would be cured. Another story relates how men carrying a chest of valuables dropped it in flood waters, however upon praying to Þorlákur they recovered the chest. Men managed to safely ford rivers with his help and at the Alþingi or national assembly a blind man regained his sight and a deaf man his hearing upon the reading aloud of Þorlákur´s miracles.

Þorlákur was a strict disciplinarian and pushed for reform within the church in Iceland. Soon after his death people believed in his sanctity and, who knows, maybe Iceland´s only saint can still perform miracles if called upon.

You can also listen to this story