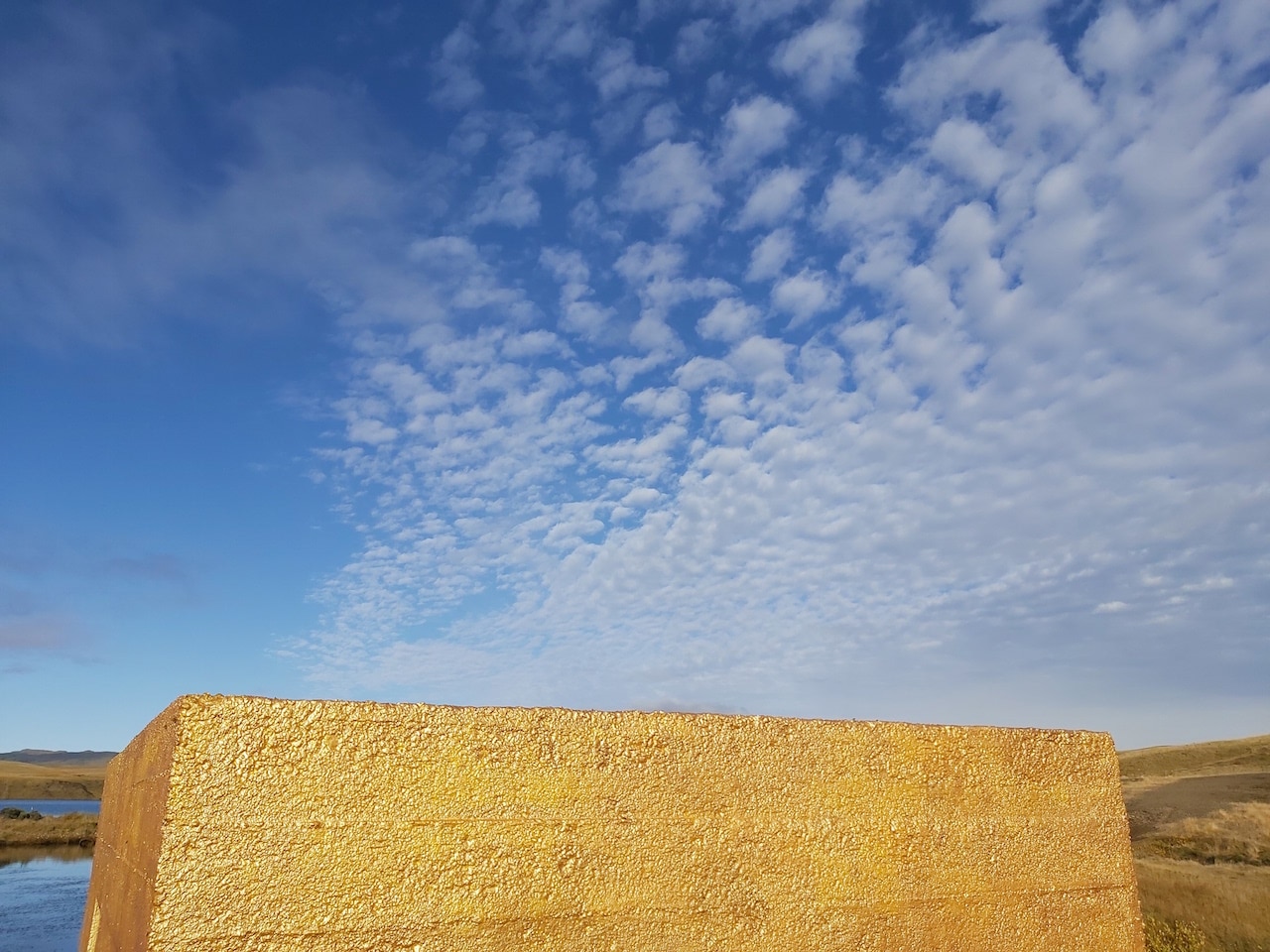 The Gold Nugget is LandArt made created by the are duo YottaZetta. The members of YottaZetta are Ólöf Rún Benediktsdóttir and Rán Jónsdóttir. In The Gold Nugget, the aim is to recall the history of hydropower plants in Iceland and the culture associated with them. At the beginning of the twentieth century, Skaftfellingar builds around 200 power pants in town streams here and there around the country. The small home power pants then gave way to large and powerful hydropower plants owned by the state. 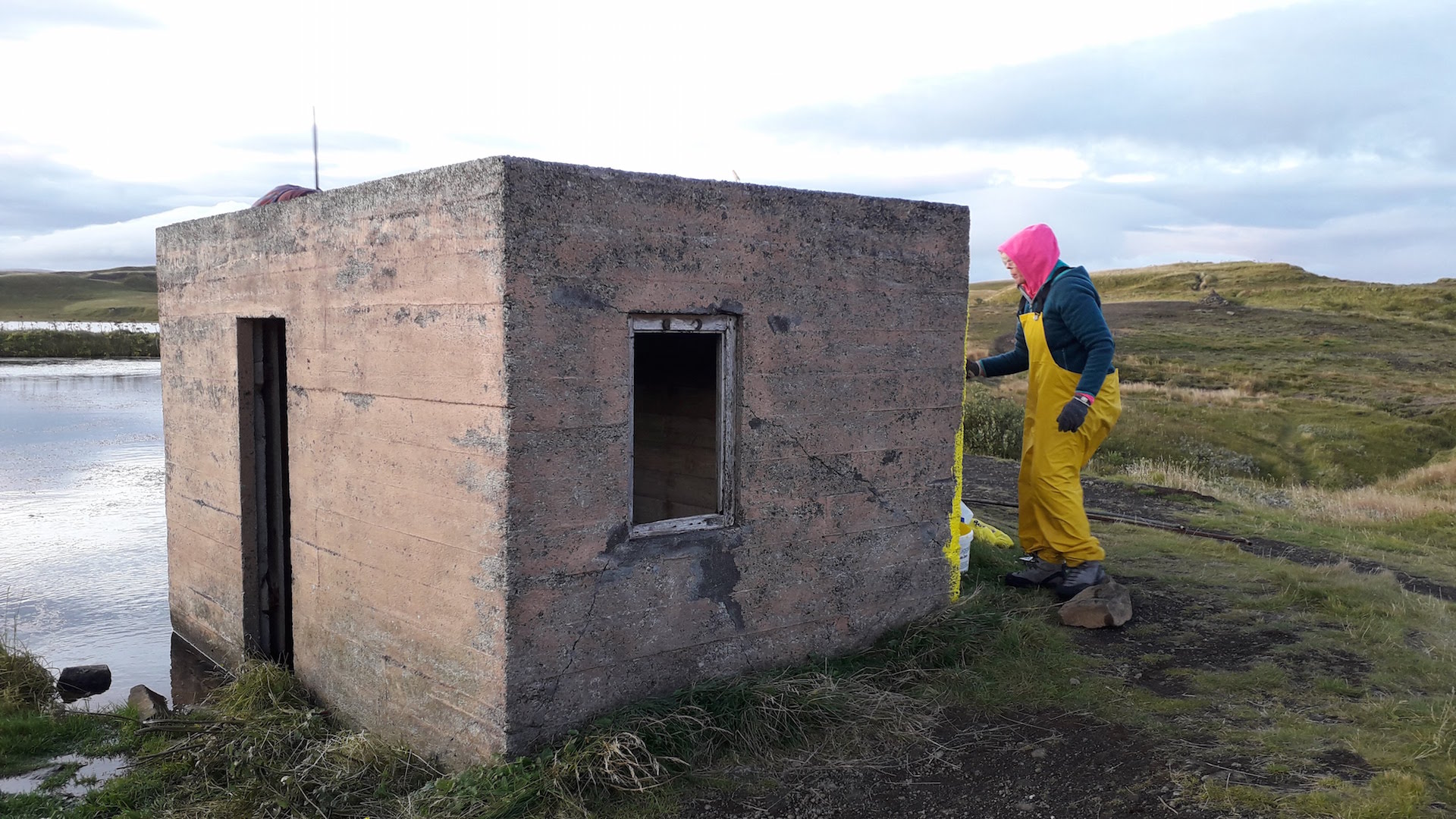 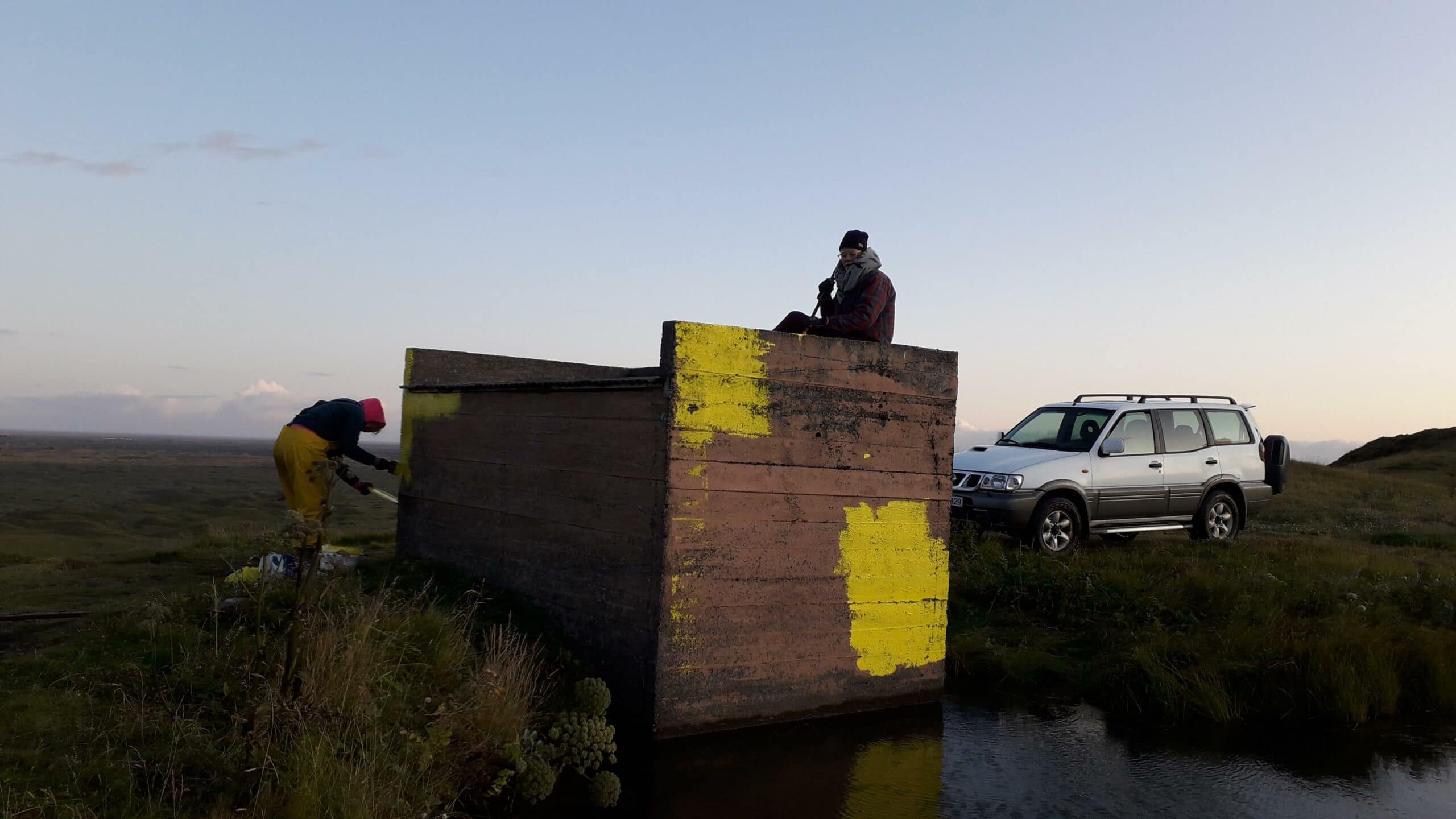 The intake house is man-made but it is also part of the landscape and has been there since about 1940. Children who grow up in Kirkjubæjarklaustur have no idea that Systravatn is much larger now than it was when thesisters from the convent visited in ancient times. The lake and the waterfall as it faces us today are part of a manmade landscape where large ditches were made all over Klausturheiði to provide more water to Systravatn and thus ensure water to produce electricity all year round. The turbine is in a house below the mountain and you can see the pipe on the footpath up to the edge. The fall is high and therefore a lot of electricity is generated. Ólöf grew up in one of the old houses in Kirkjubæjarklaustur, in a house that is still heated and lit with electricity from the home power plant. 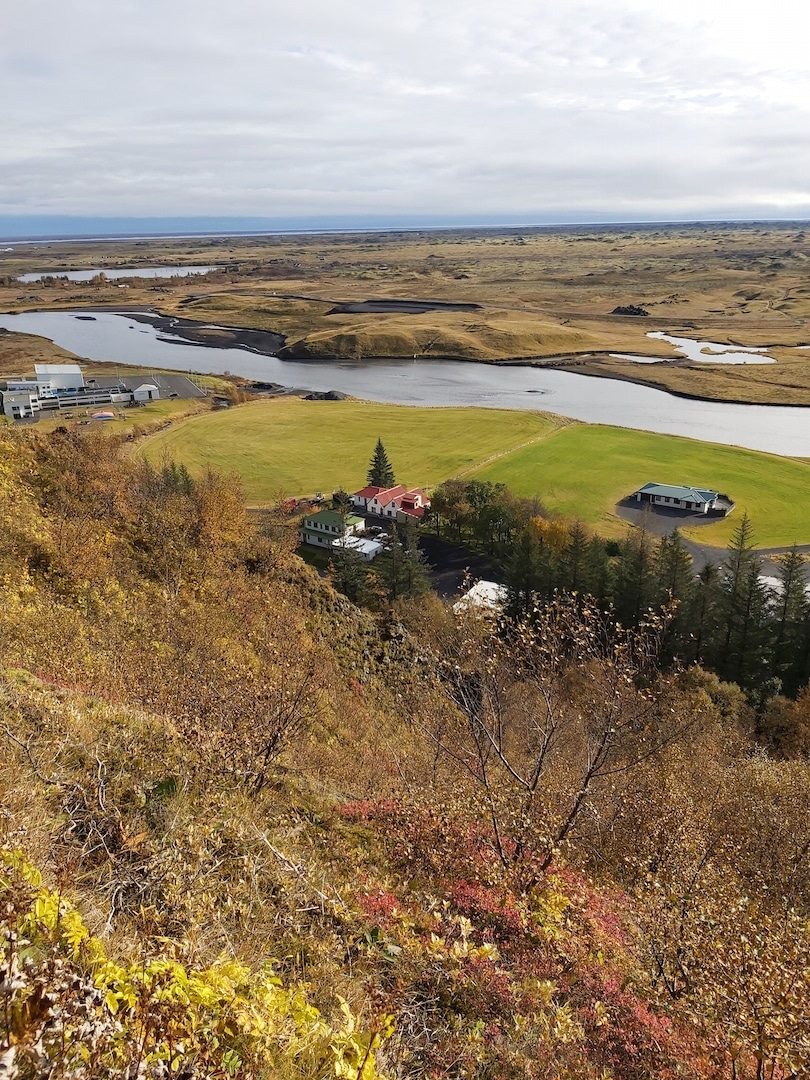 The special position of the project in Icelandic Art

The Gold Nugget project focuses on interesting intricacies in the infrastructure of society: the small power plants and the home power stations that are about to fall into oblivion in the extreme history of electrification in Iceland. In the last century, the country was electrified by private farmers. The small power plants then fell into disrepair for the large power plants for heavy industry and high voltage lines owned by the state. Today, however, the situation is reversing and the new European Community´s clean energy for all policy sets a new tone with an emphasis on environmentally friendly energy production” at home in the province”, and especially for consumers who do not have a strong economic position. This policy has a common denominator in the proliferation of power plants that took place in Iceland in the early twentieth century when the farmers Bjarni in Hólmur, the brothers from Svínadalur, and others build turbines from coastal eruptions and power plants for all those who needed them. The Gold Nugget is a memorial to this golden age of small domestic power plants at this zero point in Iceland´s power plant construction.

The project also has a full message for society in light of the fact that we are at a crossroads in environmental and energy matters.

In the art duo, YottaZetta is Ólöf and Rán. They met when they were at the same time studying in the visual arts department of Listaháskóli Íslands.

Ólöf and Rán first worked together in 2015 and held an exhibition in Anarkía, Art Gallery in Kópavogur at the beginning of 2016. It was a common interest in the industrial material that connected them. They have explored Icelandic industrial romance and the relationship between women and romantic femininity, the world, which often appears as clear contrasts bu at other times converges and intertwines in an unexpected way.

Ólöf Benediktsdóttir has worked as a poet and visual artist after graduation, she has set up exhibitions all over the country, including in Alþýðuhúsið in Siglufjörður, in the factory in Hjalteyri, and at LUNGA in Seypisfjörður. Ólöf has also traveled around Europe, read her own poems, and studied the slam poetry scene on behalf of UNESCO, the City of Literature in Reykjavík. Ólöf has also graduated from  sound technology at Tækniskóli Íslands.

Rán Jónsdóttir has an MCS degree in electrical engineering, she is working as an engineer and visual artist. Rán has also an MA in Art from Listaháskóli Íslands. Rán runs her own company: Hálogi Distillery in Reykjavík. 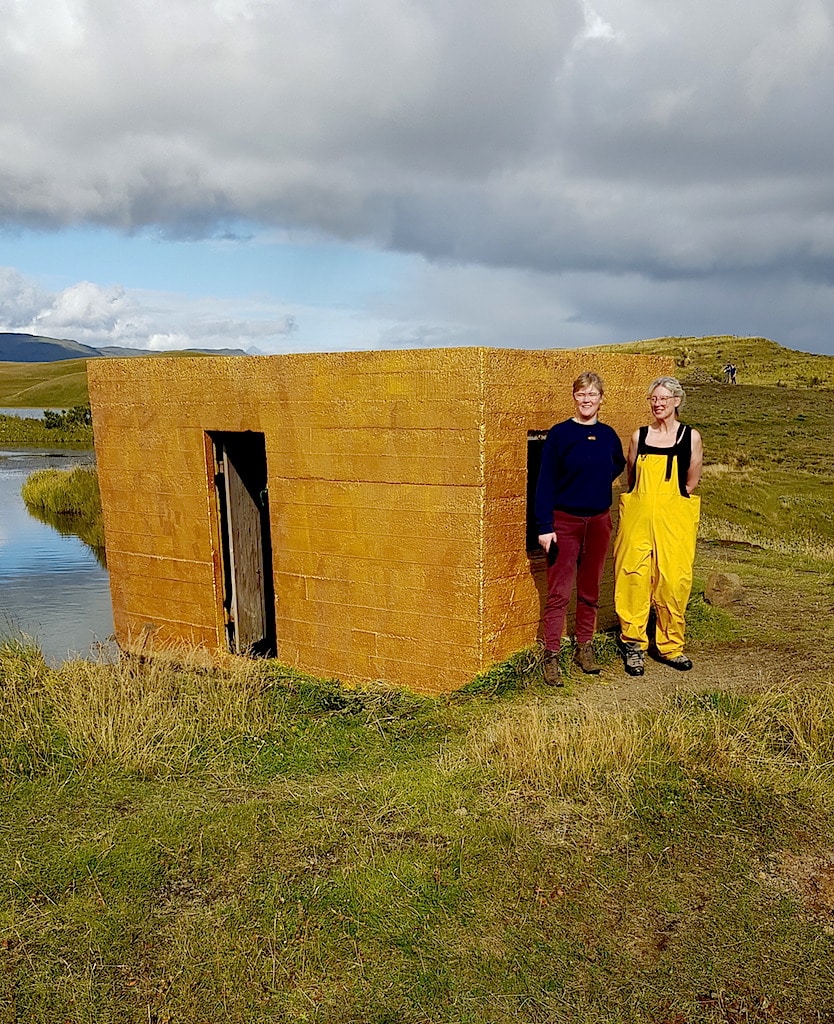 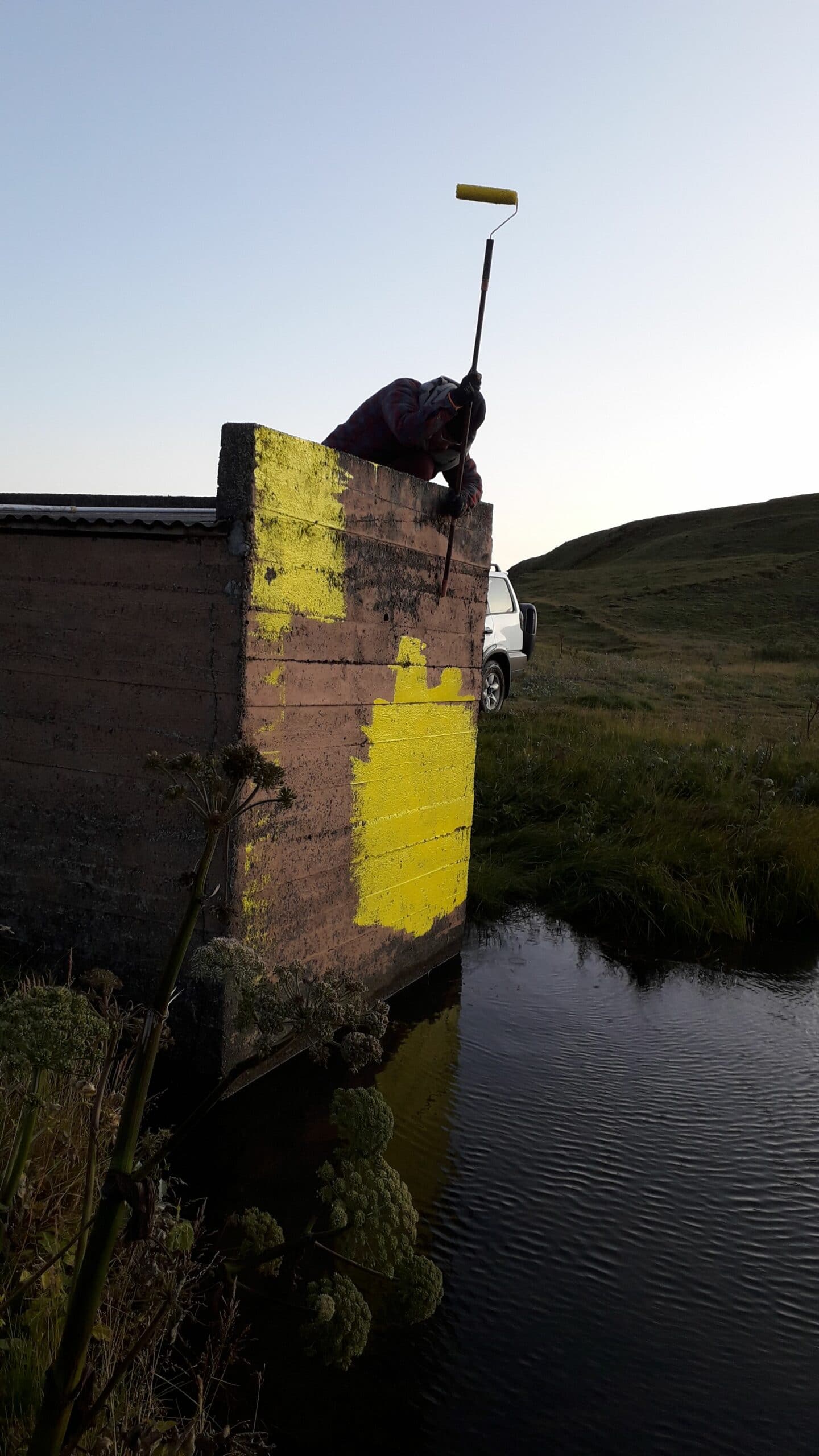 The assistant for the painting work was Lárus Siggeirsson. He was born in Klaustur and has lived there all his life. Lárus remembers the installation of this power plant and the construction of the intake house. Stories about the family that lived and build up in Klaustur: Frásagnir af Klausturfjölskyldunni and stories about how the farmers build the turbines and the power plants:  rafvæðingu sveitanna are on this web, Eldsveitir.is  It is not in English but there are many old photos to see, even if you can´t tead all the text.