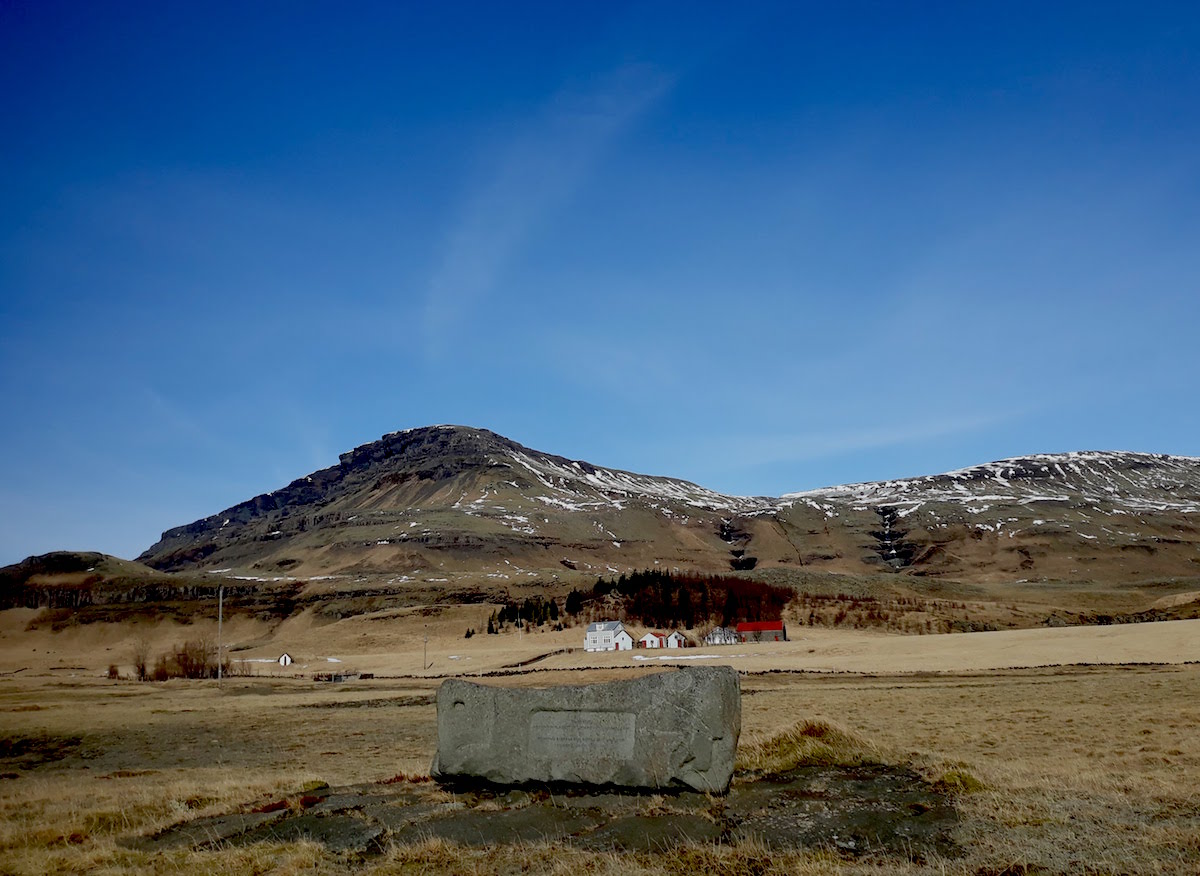 A memorial stone to the memory of Þórunn and Filippus stands by the road leading to the farm Kálfafellskoti.(Photo LM)

The art of herbal medicine has been practised in Iceland for centuries. However, there is only one family that identifies itself with the art. This family traces its roots to the farm of Kálfafell in Skaftárhreppur. On this farm lived the couple Þórunn Gísladóttir (1846-1937), herbalist and midwife, and Filippus Stefánsson (1839-1909), silversmith and farmer.

Þórunn was born on the farm Ytri-Ásar and lived there until six years of age. At the age of 22, she married Filippus Stefánsson. Þórunn studied midwifery under Dr. Oddur Johnsen and was a midwife and herbalist as long as her health allowed. She travelled widely in her work. All the time that she lived at Kálfafellskoti there was no doctor for long periods in the surrounding district and so she filled the need for medical assistance. Þórunn was unofficially given a licence to practise medicine by the authorities and the state physician, Dr. Schierbeck, even sent her medicine. He also sent her requested herbs as she had a passionate interest in this field. Þórunn was also a pioneer in growing potatoes. The cultivation of potatoes started with a red type salvaged from a French schooner that ran aground on the sands. 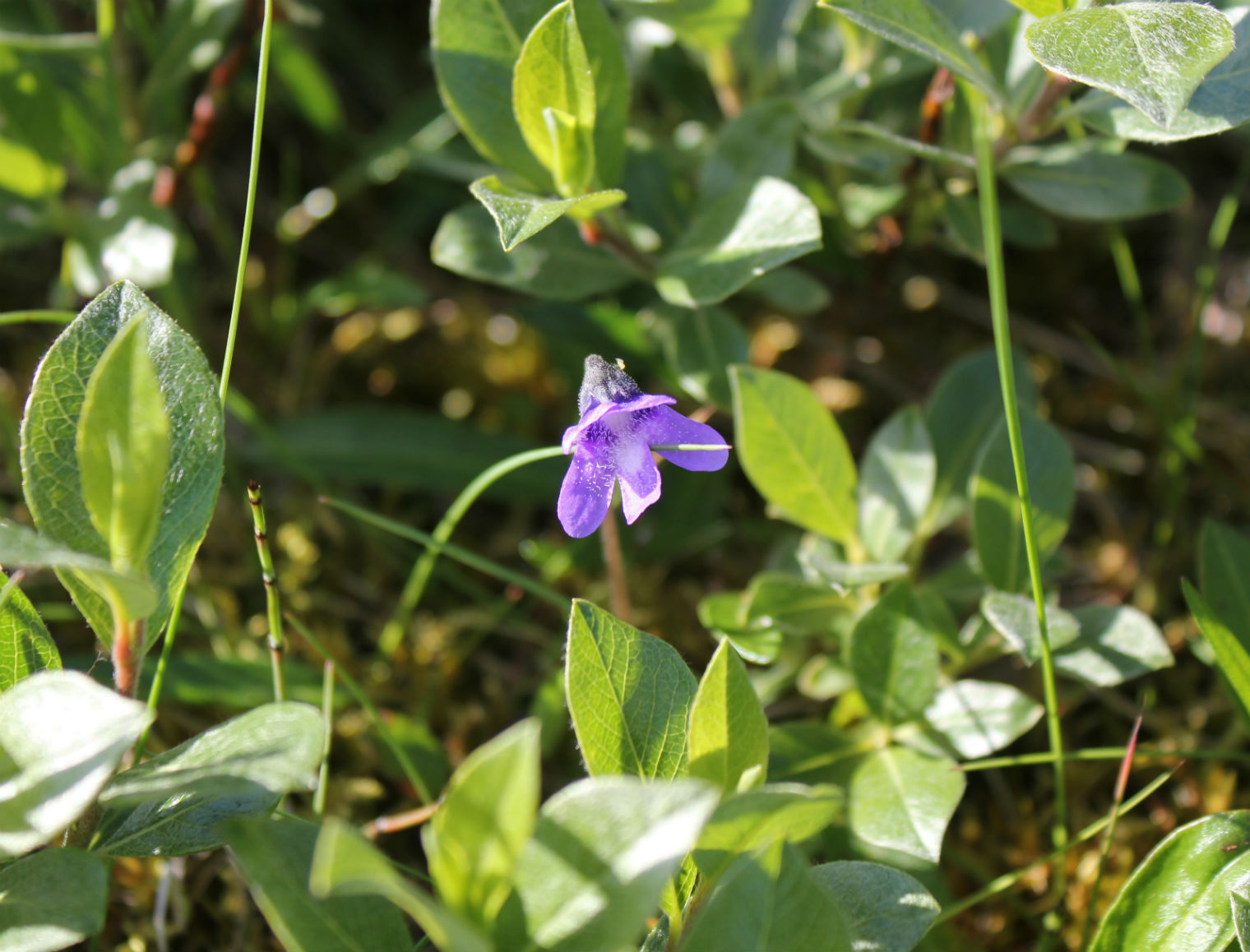 The mother of Þórunn Gísladóttir was Þórunn Sigurðardóttir, who was also a midwife and herbalist. She was raised on the farm Steig in Mýrdal. Her mother was Þórunn Þorsteinsdóttir, the daughter of Karitas Jónsdóttir, who in turn was the daughter of Þórunn Scheving, Rev. Jón´s step-daughter. Could it be that Rev. Jón´s extensive knowledge of herbs and plants could have been passed down from one generation to the next? Nowhere is it mentioned in the records studied by this author, but there is a reference to Þórunn Gísladóttir owning two books on herbal practice. 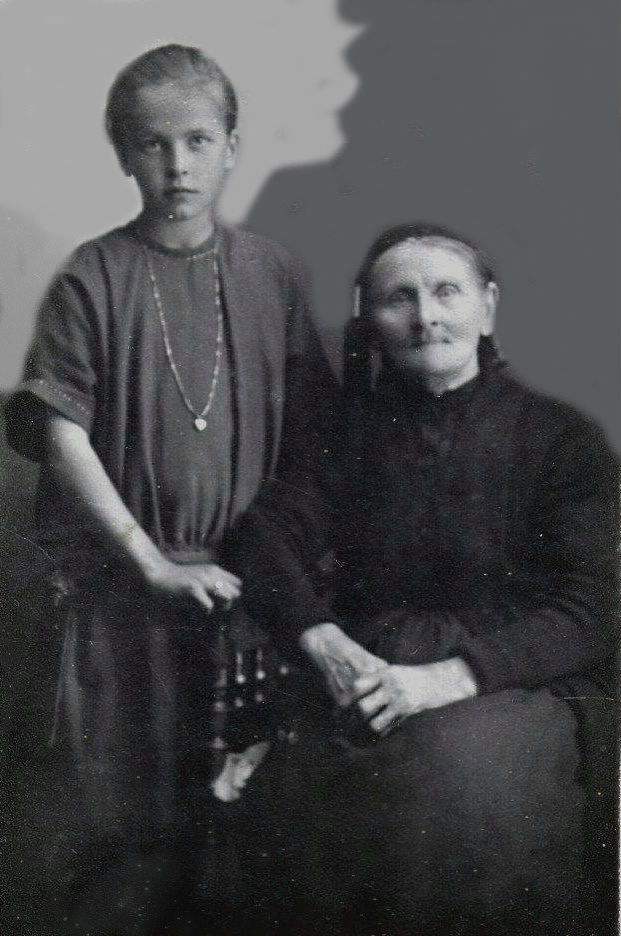 The Herbalist Þórunn and her granddaughter, Helga. (Owner. VR) 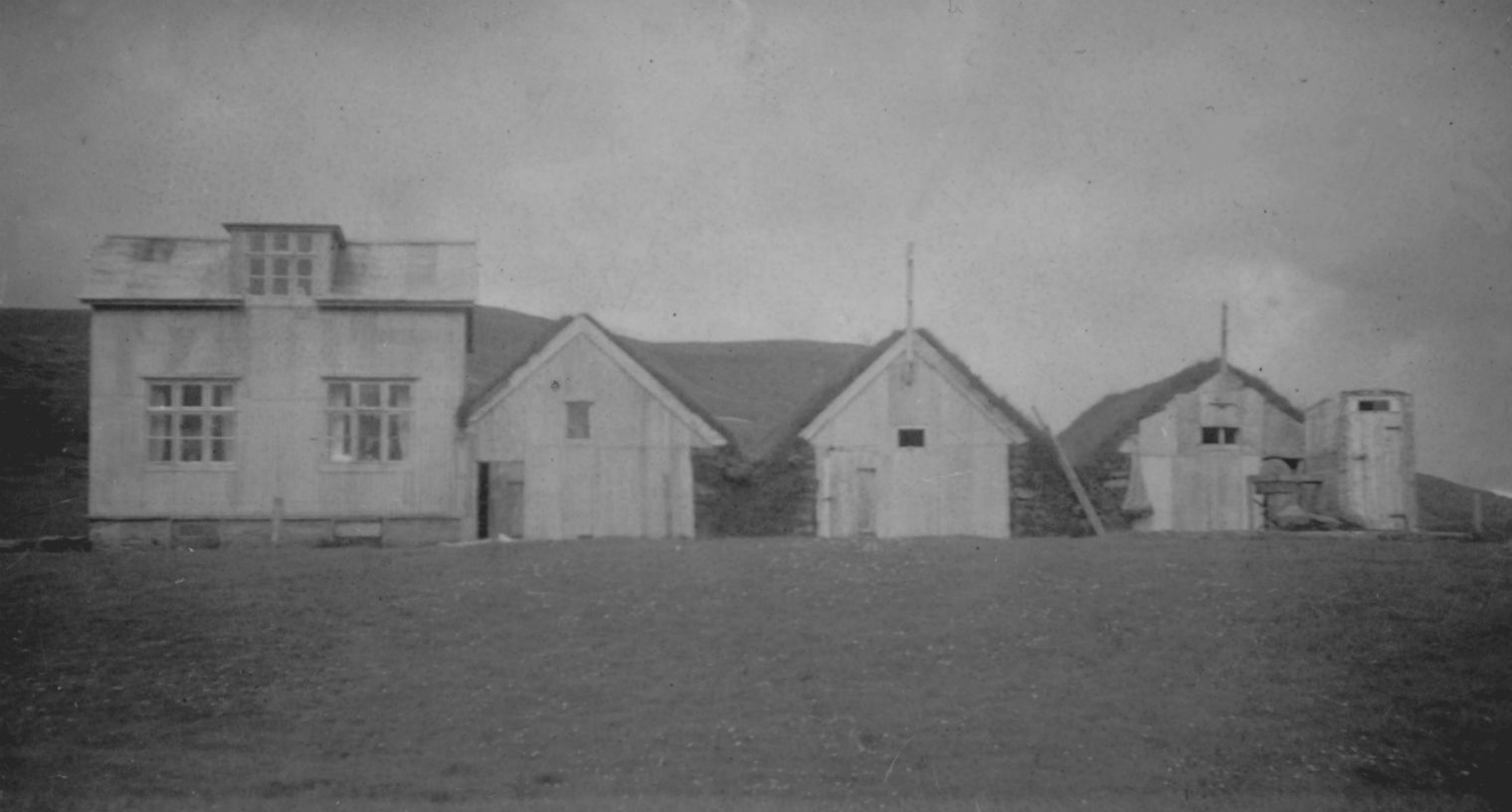 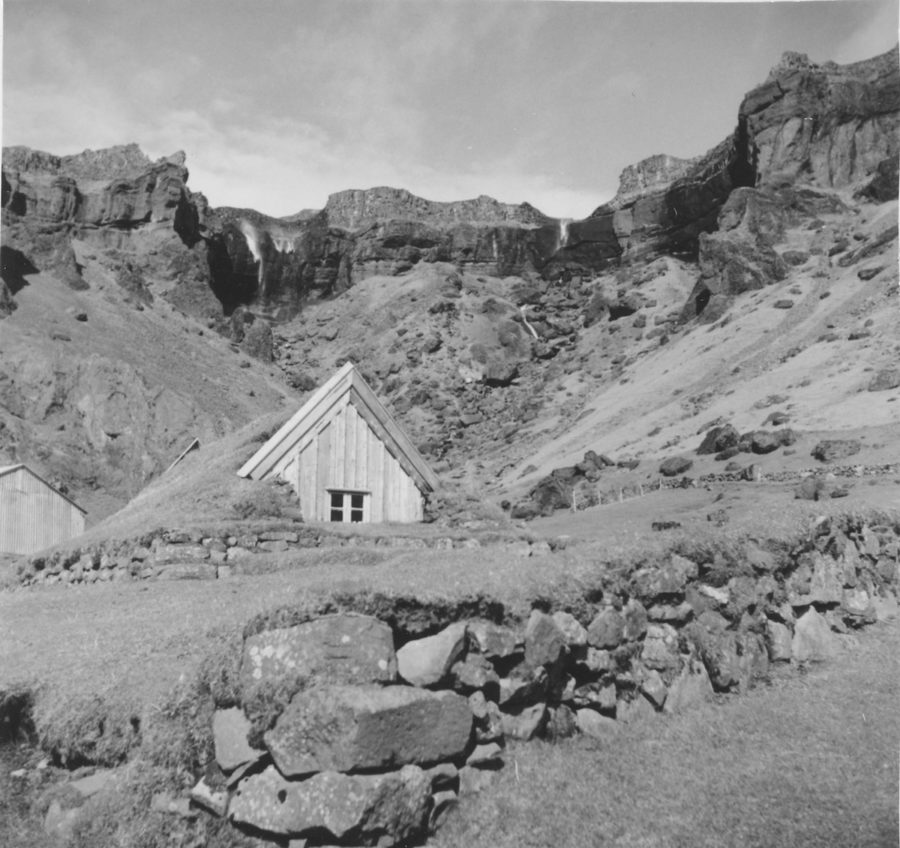 In Núpsstaður is an old college chapel. (Owner. VR) On the photo abowe you see the houses in Kálfafellskot about 1950. The houses are still there (Owner. JK_BK) 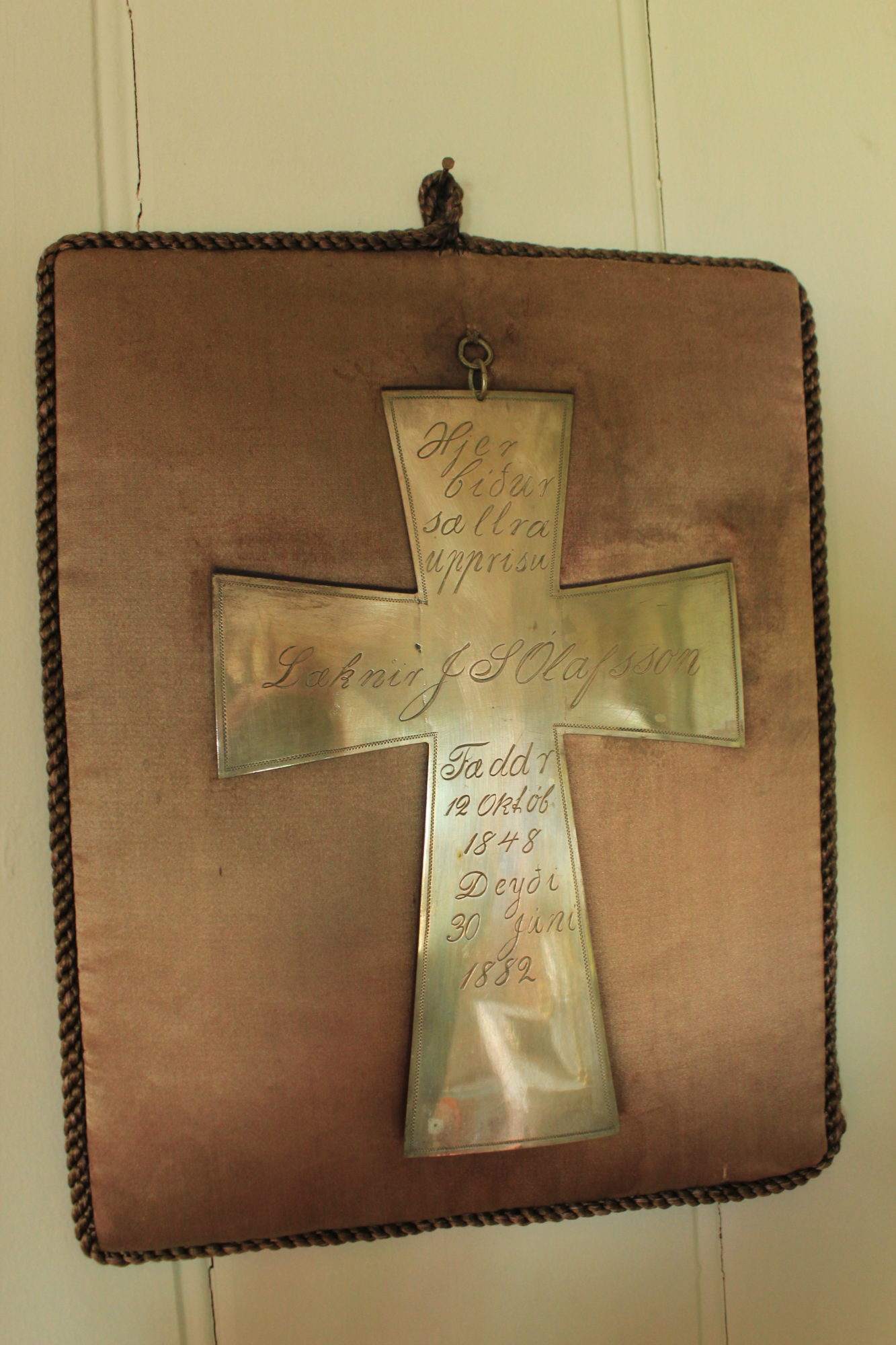 This is the silver cross Filippus made in memory of Dr. Sigurður Ólafsson from Kálfafell. (Photo. LM)

Filippus Stefánsson was a skilled smith both in wood and iron, as well as precious metals. Items he made included silver jewellery, brooches, tassel clips, snuff boxes, boxes and whips. One of his whips was presented to King Kristian IX when the nation was celebrating one thousand years of settlement. Another one of his works can be seen in the church at Kálfafell. It is a silver cross made in memory of Dr. Sigurður Ólafsson from Kálfafell.

Seeking a better life in the east

Þórunn and Filippus lived at Kálfafellskot up until 1897. They had 14 children, nine of whom survived into adulthood. Despite working extensively as a midwife, Þórunn received little remuneration for her labours and life was hard on the small farm. In 1882, livestock died due to the extreme cold and the area was hit by a measles epidemic and other misfortunes. The couple took the decision to leave and move east in the hope of a better life. Their son, Erlingur, had already sought a tenancy on a farm in the east. The plan was that the men in the family, two over 20 and two around confirmation age, should see to driving the sheep east. The four set off with 150 sheep, driving them over river estuaries and sands, across fjords and mountains. Mile after mile they travelled under difficult weather conditions in the spring of 1897. Despite the long and arduous journey not a single sheep was lost. Upon arriving in the east, they discovered that the farmer who had promised them land had broken his word and given the farm to another. There was nothing for it but to sell the entire flock. Later, Filippus and Þórunn came east with the rest of the children and the family was forced to make do as best they could until they could buy the farm Brúnavík two years later. Life was hard but things would turn out well in the end.

The power of herbs

One of the stories of the healing power of a herbal ointment prepared by Þórunn is to be found in the book on herbal families. Gissur, Þórunn´s son, was repairing a motor on a fishing boat in the Westman Islands when it suddenly caught fire. Very quickly Gissur´s clothes were aflame. He jumped into the sea and managed to put out the flames but was severely burned. A doctor was called but his opinion was that there was little hope of him surviving. Þórunn was living with her son at the time of the accident. She was very angry at the doctor´s dismissive attitude and demanded that he leave. The following weeks she treated Gissur using herbal ointments. To make a long story short, Gissur made a full recovery and returned to work two months later. 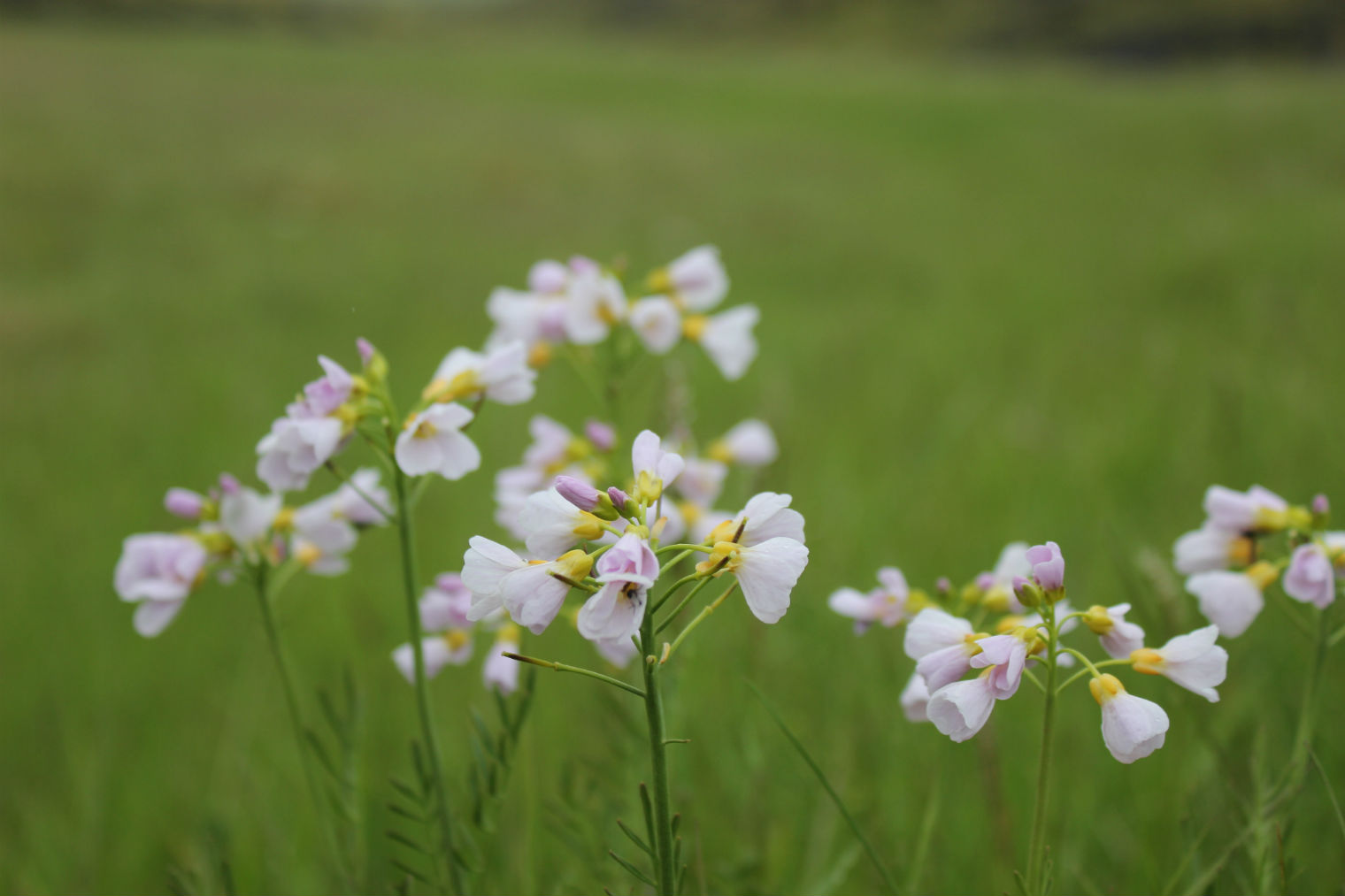 Generations of herbalists in the same family

Through time various descendants of Þórunn and Filippus have carried on the family´s herbal traditions and with each generation, some have been herbalists themselves. Their son, Erlingur (1873-1967), was well known for his medicinal expertise. He published a booklet on herbal remedies in 1955, but for the most part, his knowledge was retained in his head. Both Þórunn and Erlingur were on occasion harassed and even threatened with legal action because of their work as herbalists. Accusations that they were charlatans and even practised sorcery were levelled at them. But many fully believed in their healing ability and sought them out for help over the years. Erlingur´s daughter, Ásta, assisted her father and took over when he died and practised herself up until her death in 2005. Ásta also inherited her herbal skills from her mother, Stefanía Ólafsdóttir, who was a midwife.

The collecting of plants is a major part of what a herbalist does. Ásta and her father collected many plants in the east of the Skaftafell district. It is a wild and unpopulated area and so free of pollution. Ásta´s children have also practised herbal medicine and others in the family have had a keen interest though not practising herbalists.